This year’s Mixenden Activity Day took place on Wednesday 1 August 2018 (MAD18 and Yorkshire Day) at the Mixenden Activity Centre. The day was a huge success with over 30 local children and their parents attending the event.

The day supports local children to get active during the school holidays. The free of charge day is organised by the Ovenden and Mixenden Initiative, Mixenden Activity Centre, Calderdale Council and the Yorkshire Sport Foundation. 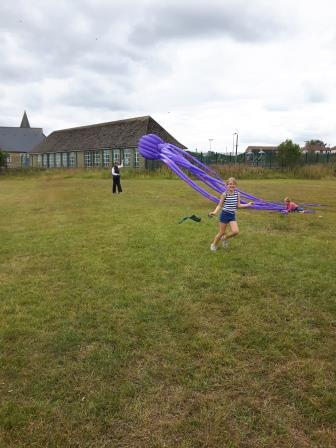 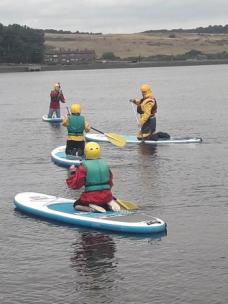 Mixenden Activity Centre is holding a day of fun, sports and activities for #MAD18 on Wednesday 1 August, 10:00am-3:00pm with all the events as in the timetable below. 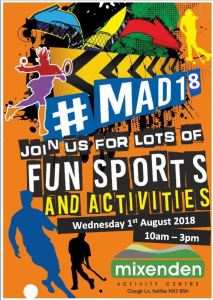 The theory behind the MixMatch challenges is to get young people working with uniformed services to cut down barriers between them. As a result of this and similar youth engagement work, the police and fire service have confirmed that youth ASB and deliberate fires, especially in the Mixenden area, has been drastically reduced.

Both events began with a Tag Collection warm up task in which all participating teams headed into Mixenden Reservoir Woods to find and collect any tags matching their teams colour within a time limit and all the teams taking part worked well together.

Following the Tag Collection the teams were then split up ready to take part in separate challenges in which they were marked for their overall efforts within each challenge focusing on teamwork, timing, communication, leadership skills and initiative.

The challenges consisted of:

At the end of the challenges, semi–finalists were decided by teams who had accumulated the most points throughout the day before they went head to head in the final challenge which involved running to collect water from a paddling pool before filling a large barrel repeatedly until time ran out.

The barrel challenge came with a twist as a number of holes had been drilled around the sides of the barrels which meant the teams had to work together to keep holes plugged up whilst continuing to fill up the barrels.

Measuring sticks were then used at the end to decide the teams who would go head to head in the final water barrel challenge. 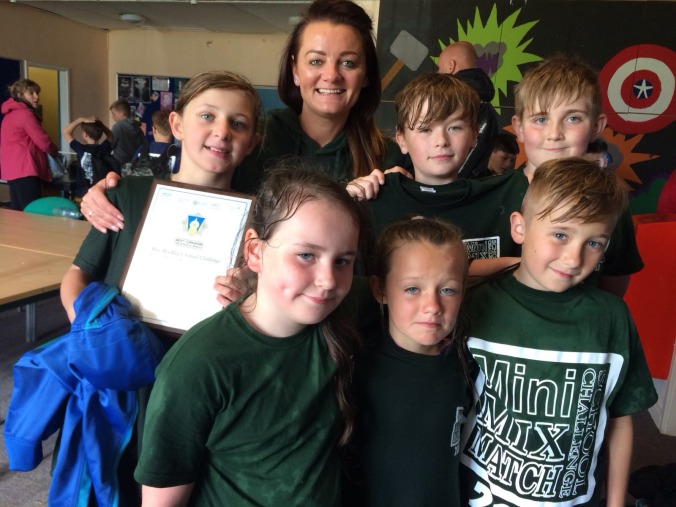 whilst Trinity Academy were the victors against Park Lane in a very closely contested final. 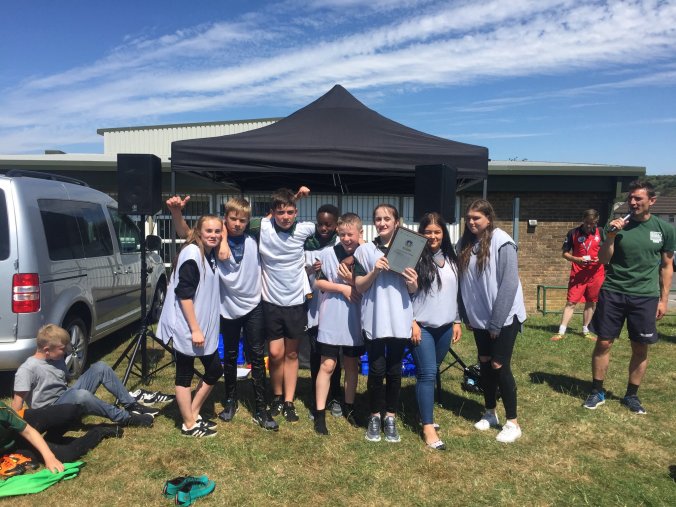 Special thanks to Clive Ingham and his staff at Mixenden Activity centre for their continual support of this event.

If you would like further information on the MixMatch Challenge event please contact Heather Stout on 0300 555 0266 or Heather.stout@ovenden-initiative.org.uk  or Oli Crosland at  Oliver.Crosland01@westyorksfire.gov.uk

On Thursday 5 April, 1:00pm-3:30pm at Mixenden Activity Centre there will be an adult come and have a go session!!!! Stand up paddle boarding…. come and try stand up paddle boarding… all equipment provided…. as well as instructor support…. £25pp limited to 8 places… book now to avoid disappointment… mac.activities@calderdale.gov.uk or 01422 245006.

We would like to congratulate Colin Skeath, a retired police inspector from Halifax who has been recognised in the New Year Honours for his services to policing the communities of Calderdale and his charity work with an MBE.

You may remember that last year Colin gave a talk at Mixenden Activity Centre about his trip around the UK . He set off with his nephew, Davis, to circumnavigate the UK mainland in an open Canadian canoe and 86 days later the journey of around 2500 miles was complete.

Colin was the Halifax Town Centre Inspector since 2012 and retired after 27 years as a police officer in January 2017.

The last ten years of his career was spent in Calderdale where he was a response Sergeant before becoming the Inspector for Halifax. Through this role Colin met and worked with numerous partners to deliver the best service possible to the communities he served.

Colin was also the Inspector on duty during the Boxing day floods of 2015 and remembers the day as one of the toughest 18 hours in his career, as he and colleagues across the district pulled together to come to the aid of people across the Calder Valley.

It is Colin’s time working in Calderdale that he remembers most fondly, and where he felt his biggest achievements have been; “I loved every minute of my time working in the district and was absolutely overwhelmed to receive the notification of this recognition. I am incredibly humbled to be recognised at such a level. I look back on my time within the police service with fond memories and was fortunate to meet and work with many brilliant and dedicated people. Without a doubt, my favourite role was working as Inspector for Halifax and I am delighted that this award highlights to work I did for those communities in my professional capacity and the work I have done in my personal time to support the charities closest to my heart.”

West Yorkshire Police Chief Constable Dee Collins said: “I am delighted that Colin and Diane have been recognised in the New Year’s Honours and congratulate them both.

“Their respective commitment to serving our communities for many years is commendable and typifies the selfless approach to helping others that I see daily from West Yorkshire Police officers, staff and volunteers.”

West Yorkshire’s Police and Crime Commissioner, Mark Burns-Williamson, said: “This recognition is very well deserved and these honours pay testament to the dedication and professionalism shown day in day out by people like Colin and Diane, who are committed to serving our communities.

“This is a valued and key part in the continued work by West Yorkshire Police in helping to keep our communities safe and feeling safe and I would like to warmly congratulate them both on this great news.”

In April 2017 retired Halifax Police Inspector Colin Skeath set off with his nephew, Davis, to circumnavigate the UK mainland in an open Canadian canoe.
86 days later the journey of around 2500 miles was complete.

On Wednesday 15 November from 7pm to 9pm at Mixenden Activity Centre (HX2 8SH) you can catch up with Colin and hear the story of how this massive feat of endurance was planned and executed, taking the fearless pair though many dangerous tide races, over falls and whirlpools, not to mention having to contend with the British weather!

“A fantastic, entertaining, serious, enjoyable, informative talk. Anyone with an interest in canoeing or adventure travel ought to hear the story.” Andy Carden, Newcastle.

Tickets are FREE but there is a suggested donation of £5 for adults which will go towards Colin and Davis’ chosen charity, Forget Me Not Children’s Hospice and the evening also includes a buffet supper.

The Forget Me Not Children’s Hospice supports children with life shortening conditions and their families. They currently support more than 185 families and could support many more if they had the funds. They need to raise £3.8 million each year to continue this support with almost all of their funding coming from the community.

The evening will be hosted by Halifax North & East and Halifax Canoe Club.

Starting on 27 May the Mixenden Activity Centre Peer mentors completed a 170 mile cycle trip from Morecombe to Bridlington going from Lancashire to Yorkshire – the Way of the Roses rather than the wars of the roses.

The group have learnt so much over the past few weeks and throughout this journey… The group raised around £1000 towards there summer expedition to the Czech Republic and have already completed national accreditations in First aid and are working on young navigators award, food hygiene and health and safety awards… as well as being involved in stop and search scrutiny panel and working on the community cohesion and the prevent agenda in the local area. Each individual has developed themselves personally in different ways from believing in themselves and their ability, patience and tolerance of each other, team work and supporting each other in difficult times as well as achieving something that will live with them forever….

Here is the story of their road trip as told by themselves!

5.30am we all met at MAC to begin our journey to Morecombe to start the way of the roses……. We arrived; got set up and set off on the 170 miles to Bridlington….. via settle, Pateley bridge and Stamford Bridge.

The start was nice and flat heading out on cycle paths towards Lancaster. After heading under the M6 motorway the group started to feel the hills of the Yorkshire Dales… just before we arrived in Clapham we heard the Thunder in the distance and the skies start to darken…. As we headed towards Austwick the heavens opened… torrential rain and hail stones….  We got battered for about 5 mins before meeting the van and hiding for cover…. The group sat for about 20 mins while the downpour continued with only about 5 miles of the day remaining… Once the weather had slowed we headed out only to be caught again by the torrential rain Helwith bridge… this time to roads turned to rivers but the group were in high spirits as the end of the day was in sight…..