Kevin Pearce Children’s Centre and North Halifax Partnership invite you to join us in our Christmas Light Trail!

This short walk is ideal for little feet! It will be a bright Christmas experience for children and young families! 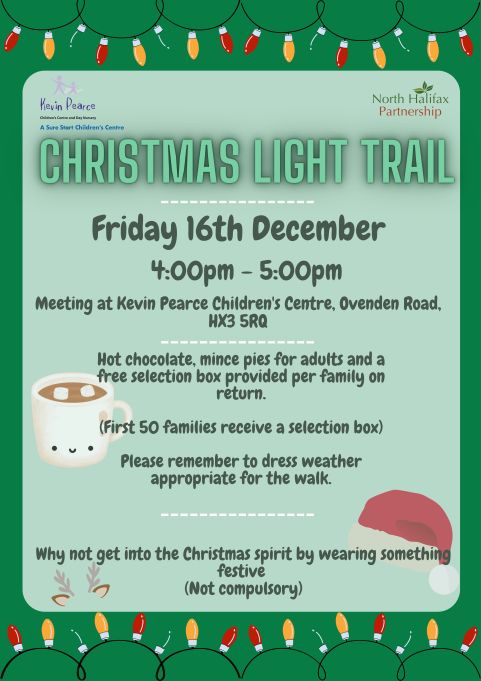 There will be hot chocolate and mince pies for adults and a chocolate selection box for the first 50 families that arrive!

We hope you will join us!

No need to book, you can turn up. Please dress appropriately for the weather.

Parents and carers in West Yorkshire asked to be on the lookout for symptoms of Group A streptococcus, or ‘Strep A’, in children (commonly called scarlet fever)

Parents and carers in West Yorkshire are being asked to be on the lookout for symptoms of Group A Streptococcus, or ‘GAS’, in children (more commonly known as scarlet fever). Symptoms include sore throat, headache, fever and a fine, pinkish or red body rash. On darker skin the rash can be more difficult to detect visually. It will have a sandpapery feel when you rub your hand over a child’s skin.

Parents and carers who identify these symptoms should contact NHS 111 online, call NHS 111 or their GP because early treatment with oral antibiotics is important to reduce the risk of complications, such as pneumonia or a bloodstream infection.

If your child has scarlet fever keep them at home until at least 24 hours after the start of antibiotic treatment to avoid spreading the infection to others.

The UK Health Security Agency advises that Group A streptococcus (GAS) is a common bacteria, which lots of people carry in their throats and on their skin. It doesn’t always result in illness. However, it does cause several infections, some mild and some more serious. Whilst infections are still uncommon, there has been an increase in cases this year, particularly in children under 10.

The following is an excerpt. Find full press release here :

The UK Health Security Agency (UKHSA) is urging parents and guardians to ensure their children are up to date with all their routine childhood immunisations including polio and measles, mumps and rubella (MMR) vaccinations. This comes as new data shows vaccination coverage for young children fell last year for virtually all programmes.

Vaccination rates have fallen over several years and additional disruption caused by the coronavirus (COVID-19) pandemic, beginning in March 2020, is likely to have caused some of the decreases in vaccine coverage seen in 2020 to 2021 and 2021 to 2022 compared to earlier years.

It is important vaccination coverage is recovered as soon as possible to levels recommended by the World Health Organization (WHO) of 95% for all childhood immunisation programmes to help prevent the spread of avoidable serious – and sometimes deadly – diseases such as measles and polio.

Since the introduction of the measles vaccine in 1968 it is estimated that 20 million measles cases and 4,500 deaths have been prevented in the UK.

Measles is highly contagious so even a small decline in MMR uptake can lead to a rise in cases. Since international travel has resumed closer to pre-pandemic levels, it is more likely that measles will be brought in from countries that have higher levels of the disease and cause outbreaks.

Measles can lead to complications such as ear infections, pneumonia, and inflammation of the brain which require hospitalisation and on rare occasions can lead to long term disability or death.

The NHS is running a MMR catch-up campaign so some parents may be contacted directly.

The NHS and Public Health England encourage parents to get their children vaccinated against measles, mumps and rubella.

Parents and carers of small children are encouraged to ensure the children receive their vaccinations against Measles, Mumps and Rubella.

All three diseases are highly contagious and can cause serious health complications in unvaccinated children, teenagers and adults.

For more information please read the following (from the Gov.uk) website:

Home Instead are asking children in local primary schools to join their second Santa-gram campaign by using their creative talents to design Christmas cards for elderly people in Calderdale.

Read this on the Home Instead webpage

Deadline to send your Santa-gram is December 3rd

Last year’s campaign was a fantastic success with over 1,000 Santa-grams delivered to more than 500 older people: both those still living at home and some care home residents.

According to Age UK, Christmas is the loneliest time of the year for over 1.5 million older people, with those who have lost a loved one struggling the most.

After this most difficult of years with many clubs and church groups still cautious about meeting, this provider of home care to the elderly and the vulnerable decided to repeat their campaign to help relieve some of the loneliness felt by many elderly people across our community.

The Santa-gram campaign involves children at local primary schools creating Christmas cards, drawings, bookmarks, puzzles or writing a letter to an older person to open in the run up to Christmas to help bring a smile to their day.  The Santa-grams will be delivered to elderly people during the first two weeks of December.

Home Instead Senior Care Calderdale will be working in partnership with local community groups and charities such as Age UK, Memory Lane Dementia cafes, local care homes and assisted living facilities for the elderly to deliver the Santa-grams in time for Christmas.

“Since the reopening from lockdown in July, many of the community groups which serve the elderly have still not restarted their meetings and as result a lot of older people are missing out on the companionship, care and love that many of us simply take for granted.  We wanted to do something to help out and this is a nice way to bring two different generations together.”

Here is one of the many comments we received last year about the campaign:

“Thank you so much for arranging for these (Santa-grams) to be sent out to us. The cards are so good with lovely artwork by the children.  It has really cheered us both up.  When we opened up the surprise we both got a very warm feeling inside and it really did make us smile.  The jokes had us both laughing.”

Home Instead are accepting items to be included in the ‘Santa-grams’ from now until 3 December   If your organisation, church or community group would like to receive Santa-grams, contact Julie Ingham, Community Engagement Officer at Home Instead Senior Care Calderdale on 01422 292424 or email Julie.ingham@homeinstead.co.uk

Home Instead. To us it’s personal

Do you live or go to school/college in Calderdale?

If so, please could we ask you to take part in this opportunity to have your say on helping shape local mental health services. The survey is open from Friday 7th February until Friday 6th March 2020. Please find the link to the survey here 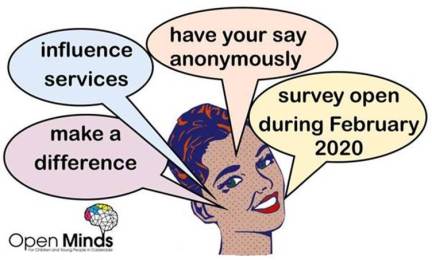 The information gathered is confidential, meaning we can’t identify you from what you tell us.

We will use the information to help us further improve mental health services
for children and young people in Calderdale.

We, the young people’s Tough Times Reference Group, have released this survey during Children’s Mental Health Week. This is to collect views from all children and young people on emotions and mental health support with the aim to help shape and improve services. We would like everyone who takes part in this survey to know its anonymous, and the results will be shared with managers of services that will listen and take these results from this survey seriously.

Our popular Access All Areas clubs offer different sensory play craft activities. Places are limited and most clubs are fully booked, so get your places on remaining clubs now!

Our clubs are free, include some time exploring the museum before getting crafty and creative with our trained Enablers, and the whole family is invited!

Remember: Places MUST be booked in advance, and clubs do tend to fill up. So give us a call on 01422 330069 to book your places. You can read more about each creative theme on our website.

Have you seen me?

We’re holding an Ear Defender Amnesty!
We lend out ear defenders for visitors with sensory conditions who might find the many sounds of Eureka! a bit overwhelming, but our stocks are running low. Have you borrowed a pair and accidentally taken them home? We’d love to have them back if poss, just drop them in – no questions asked

Find a Warm Welcome Space Near You

Discover the locations of Warm Spaces around Calderdale – and beyond.